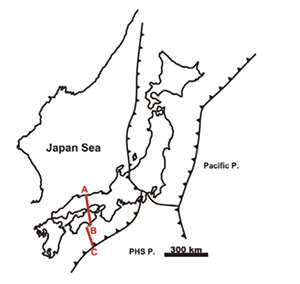 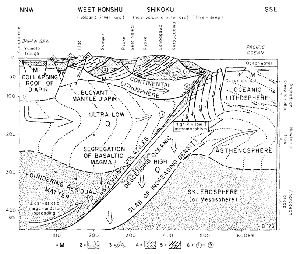 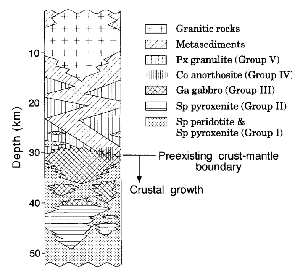 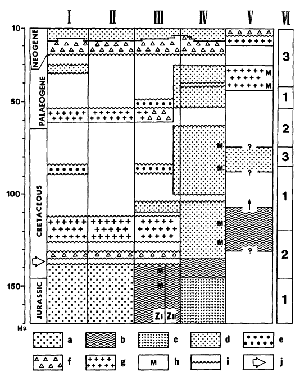 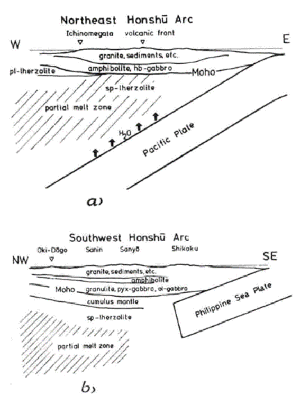 Subduction zones are one of the major sites of earthquake and volcanism on earth. It is believed that fluid plays important roles in the generation of earthquake and magma. The existence of fluid in the subduction zone is predicted by the seismic tomography or electrical conductivity. However, there are very few studies that quantitatively estimated pore fluid content in rock.

Recently, the seismic velocity and electrical conductivity were intensively investigated at the Naruko district of the Northeastern Japan. Using these data, we make a new attempt to draw a geologic map with fluid distribution ("Geofluid map") and propose the methodology to estimate the rock type and the volume of fluid from the geophysical observations. First, possible rock types which constitute the crust and upper mantle under the Naruko district were narrowed down based on geological and petrological information of this area. Literature data of elastic wave velocity of possible rock types at high pressure and temperature were used for conversion of the seismic velocities to fluid-absent rock types. In consideration of the deduced rock types, we estimated parameters of pore fluid (fluid content, geometry and connectivity) by the modified Archie's law from the electrical conductivity. Taking the estimated fluid parameters into consideration, fluid-present rock types were finally determined from the seismic velocities. The findings from this study revealed that there was a fluid-bearing columnar region (several vol% fluid) up to 5 km below the Naruko volcano in the granitic upper crust.